Was John 8:2-11 in the original book of John or not? (The story of the woman caught in adultery.)

One of the very earliest complete Greek copies of the New Testament, the Codex Sinaiticus from circa AD 350, does not have John 7:53-8:1-11. The purpose of this article is to give a few possible reasons why those verses might have been intentionally removed by a bishop in circa AD 350.

Story of the Woman Caught In Adultery

2Early in the morning he came again to the temple. All the people came to him, and he sat down and taught them. 3The scribes and the Pharisees brought a woman who had been caught in adultery, and placing her in the midst 4they said to him, “Teacher, this woman has been caught in the act of adultery. 5Now in the Law, Moses commanded us to stone such women. So what do you say?” 6This they said to test him, that they might have some charge to bring against him. Jesus bent down and wrote with his finger on the ground. 7And as they continued to ask him, he stood up and said to them, “Let him who is without sin among you be the first to throw a stone at her.” 8And once more he bent down and wrote on the ground. 9But when they heard it, they went away one by one, beginning with the older ones, and Jesus was left alone with the woman standing before him. 10Jesus stood up and said to her, “Woman, where are they? Has no one condemned you?” 11She said, “No one, Lord.” And Jesus said, “Neither do I condemn you; go, and from now on sin no more.”

I was recently told that most people are not interested in finding out if the story of the woman caught in adultery was in the original book of John. That might very well be true, but I am hoping to find some clues. In Bible study, when we get to that passage, we usually ignore the note attached to that passage. Someone brave enough might say something like, “Well, the early manuscripts didn’t have that story.” No one really wants to ask why in a small group study. An awkward silence clouds over when someone says it: an early manuscript did not have it. Someone with a keen mind might respond, “Yes, but earlier manuscripts probably had it.” Your Bible might give you the following note related to that passage:

“The early manuscripts and many other ancient witnesses do not have John 7:53-John 8:11.”

I’ve been in enough Bible studies to know that the group usually leaves it at that. Are you one of the few people like me who walks away and wonders, “Well, did the original book of John have it or not?” 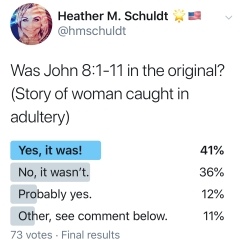 Out of curiosity, I gave a poll on Twitter, asking people if John 8:1-11 was in the original. After seventy-three people voted, the results came in as follows: 41% said yes, 36% said no, 12% said probably yes, and 11% said other. If those verses WERE in the original, then why were they removed? I would like to explore a few possible reasons, one in particular. Was it an accident? Did the scribe simply not place that story in the manuscript by mistake? Scribes were trained to not make that kind of a mistake. Was the scribe directed by a bishop to remove that passage? Was the scribe actually a bishop who left that passage out on purpose? If so, why did he leave it out?

Once I began studying early church history, three main things stood out. First, the Roman laws were extremely hostile against Christians during the first three centuries, forcing many to deny the Christian faith or face a death sentence. In a letter from governor Pliny the Younger to the emperor Trajan in AD 112, Trajan gave a reply, commanding Pliny to punish Christians. Pliny requested a consultation, and the emperor’s reply can be found in the letter, Pliny the Younger and Trajan on the Christians. Roman leaders were instructed to punish anyone who said he was a Christian. However, Christianity continued to spread. In AD 185, sophisticated philosophers such as Pantaenus were converting to Christianity. By AD 249, Roman Emperor Decius thought Christians were a threat to the empire and Christianity had to be eliminated by law. He issued legislation for every Christian to recant, earning a certificate for recanting, while bishops were punished to death.

Today, some people refer to the story of the woman caught in adultery as Pericope Adultrae or Pericope de Adulterae. For the sake of conversation, I will abbreviate it PA from here on out.

Here is a simplified account of what might have happened if the PA story WAS in the original.

The reason why the Codex Sinaiticus left out the PA story might have been because 1.) A scribe made an error and left it out by mistake. However, scribes were trained not to make such mistakes. 2.) It could be that the PA story was never in the original, but then why did the early church Fathers refer to it as an issue that some bishops wanted to remove?  3.) Like Augustine said, it could be because husbands feared their wives would commit adultery if the passage was left in. 4.) It might be that since some of the bishops wanted to kick Christians out of church for committing adultery, they removed the story on purpose. 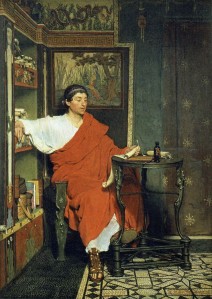 It is unbiblical for any bishop to refuse to welcome a Christian who repents. Paul was a murderer. Peter denied the Lord three times, and Mary Magdalene used to have seven demons. They all repented, turned to the Lord, asked God to forgive them, and thanked Jesus for paying the penalty for all their sins – past, present, and future.

Whatever the reason was for leaving the PA story out of the Codex Sinaiticus, we can’t ignore the fact that many early church Fathers wrote about the PA story and even stated that at least one scribe removed it.

Heather Marie Schuldt is the author of a young adult science fiction mystery, "Cindy Sailor and the Hunt for Owen" (2021). She also has a workbook for writers called "Writers 750 Emerald Workbook." She co-authored an award winning fantasy novella, "Gryffon Master," with five authors in 2015. She published six Giant Tales anthologies with over fifty authors in 2013 and 2014. She began studying apologetics in 2016, served as the president of student government, and graduated with a master's degree in 2019. She is the founder of the Writers 750 Program which began in 2012. She is a certified therapist in rational living therapy and loves to help people get better. She is happily married with three grown children and enjoys riding her bicycle. View more posts

One thought on “Story of the Woman Caught In Adultery”