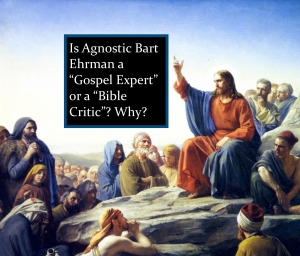 Is Bart Ehrman still claiming that the four New Testament gospel books (Matthew, Mark, Luke, and John) have contradictions? How can he still be saying that after many good explanations are available? How can he still be proclaiming his false teaching? Doesn’t he care to listen to the biblical experts who can explain how we can know that each one of his alleged contradictions is not a contradiction at all? Ehrman is an agnostic professor at the University of North Carolina at Chapel Hill who presented at least three of his concerns in a video and went on to list about seven alleged contradictions. Unfortunately, the Christian he was talking to did not offer any significant explanation as to why Ehrman is wrong. The Christian went on to say, all that matters is that Jesus rose from the dead. What? Yes, the resurrection does matter, but so do false claims of contradictions. Working out every contradictory claim does not matter? Of course they matter. It takes time to present why the contradictory claim is not actually a contradiction. If a skeptic really wants to know if a contradictory claim is just an error on behalf of the reader or the critic, let the skeptic take the time to listen to several theologians and understand what the theologians are saying and why they are saying it. If a skeptic does not really want to find good reasons why particular contradictions do not exist in the biblical text, it might be because that skeptic has a difficult time admitting he is wrong.

Ehrman, the agnostic professor and gospel skeptic, began with three concerns that he calls “problems with the gospels.” However, the problems remain with Ehrman’s lack of research and with his lack of understanding about the context, historical culture, and Mosaic law even though he is called a leading expert on textual criticism. If Ehrman continues to not accept the explanations for why his alleged contradictions are not really contradictions, then it might be because Ehrman just does not want to admit being in the wrong. Theologian Dr. Norm Geisler evaluated Bart Ehrman’s views and determined that Ehrman is not approaching the text as a neutral observer.

“Bart Ehrman believes that people should approach the Bible without any presuppositions. They should not read the text through the eyes of faith but as neutral scientific observers. The difficulty with this claim is that even Ehrman does not approach the text as a neutral scientific observer but as one with presuppositions that are contrary to inerrancy. Thus it is no surprise that his conclusions oppose inerrancy.” – Dr. Norman Giesler, Defending Inerrancy, page 70.

In this blog, I will give a short response to some of Ehrman’s claims, but a very much longer presentation can be made, perhaps in a book, showing how all of his contradictory claims are really not contradictions at all.

For the sake of respecting your time, I will stop here, but much more needs to be said in response to Ehrman’s false teaching. If you can respond to Ehrman’s false claims of contradictions, I would encourage you to blog about it or write a book. These false claims and many more from Ehrman can be shown how they are not contradictions. We need to show why these false claims are false so that Ehrman stops misleading college students and stops with his false teachings about the gospel accounts. I am convinced that Ehrman has not given his claims enough research nor has he been fair to listen to the reasons why we can know for sure that his claims are not true contradictions after all. We really can know the Bible is the Word of God, without error.