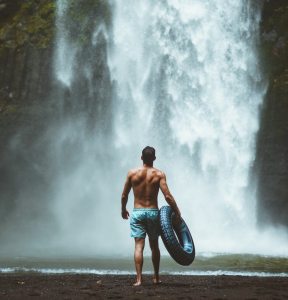 Although many skeptics have attempted to “debunk” the following ways that show “God exists,” these same skeptics have not been able to give any good reasons that lead them to their conclusion. Skeptics have given some objections, but each objection falls short in some way. As a result, any conclusion of being an atheist is based on utilizing a non sequitur, which is when a person makes a statement such as “I cannot see God,” and then he makes an illogical leap by jumping to the conclusion that God does not exist.  The reality is that just because you don’t see something, it does not logically follow that that something does not exist. Since God is “Spirit,” some skeptics equate Spirit with nothingness. However, “Spirit” is not the same as “nothing.” Looking for the “Holy Spirit” does not require the same exact approach one would take when for looking for gold, but there are a few similarities in both approaches. For example, ask yourself if Alaska has any gold. Anyone who jumps to the conclusion and says, “Alaska has no gold,” is a person who made the conclusion prematurely. If the person does not know if Alaska has gold, he is better off saying, “Maybe Alaska has gold. I don’t know.” As you can plainly see, the person who is skeptical about whether or not Alaska has any gold is a person who has not discovered truthful information, finding out for sure. There might even be some deniers who exist out there by concluding prematurely, “Alaska has no gold.” The skeptic will need to work even harder to discern false information from truthful information. By the way, Alaska has gold.

It is also important to point out that if you cannot see something, it might be more difficult to understand that that something does exist. If a skeptic does not see gold in Alaska for sure, then it might be more difficult for him to believe that gold really exists in Alaska. This is where skeptics tend to fall short of knowing if God exists. It has been said that “God is not self-evident” to those who do not know if God exists. I would take it one step further and say that “God is not self-evident” to those who continue to deny God’s existence. In the book of Romans Paul said, “The invisible things of God are clearly seen, being understood by the things that are made” (Romans 1:20). To some degree, each person should understand the reasons to believe God exists. There are many good reasons to believe God exists, and I am going to present some of those reasons in “16 Ways To Show God Exists.”

Atheism is based on a lack of information so much so that the atheist claims the burden of proof is on the believer who already knows God exists. Whenever an atheist makes his claim and stands behind the “burden of proof is on the believer,” he reiterates the fact that he has no valid case against the existence of God. Often a skeptic does not understand how a believer has come to the logical conclusion that God exists, and the skeptic might begin to discern incorrectly by saying the believer’s conclusion is a “God of the gaps” theory. The believer’s conclusion is not based on the God of the gaps theory, although in some cases, a believer might not be able to give good reasons to believe God exists. It could be that some believers find it difficult to give good reasons why they know God exists other than his personal testimony. From what I have noticed, some believers do not articulate how they know God exists. Any believer who does not give at least one good reason, other than his personal testimony, is a believer who might come across as a believer with a shallow belief or a person with the God of the gaps theory. Personal experiences are important, but skeptics tend to dismiss the existence of God if a personal testimony is the only reason for believing. In the New Testament, Peter said, “…but in your hearts honor Christ the Lord as holy, always being prepared to make a defense to anyone who asks you for a reason for the hope that is in you; yet do it with gentleness and respect, having a good conscious, so that, when you are slandered, those who revile your good behavior in Christ may be put to shame” (1 Pe. 3:15-16).

Another example of a non sequitur is when a skeptic says, “Evil exists. Therefore, God does not exist.” The reason why the thought process is a non sequitur is because the conclusion does not logically follow from the previous statement. Any skeptic who calls himself an atheist either does not know if God exists or not – or he is just denying it for personal reasons. In many cases, the skeptic is not open to share the reason why he has chosen to deny God. It could be he is suffering the pain of losing a loved one. It could be he would rather live with his idols, live in sin such as sexual immorality, greed for money, fame, or power, or living as a drunk. Regardless, he is better off calling himself an agnostic, which means that he has not found out if God really exists. An agnostic does not know if God exists whereas an atheist makes an outrageous claim that no God exists as if he has searched every square inch of the universe or as if he has searched every bit of existing knowledge. Evil exists because we temporarily live in a fallen world. Evil exists to prove that we need God. Evil things happen due to sin, fallen angels, or consequences to living in wickedness.

In this blog post, I will introduce 16 different ways to show that God does exist. There are many more ways to show God exists. The first five ways come from the most important medieval scholar from the thirteenth century philosopher and theologian, Thomas Aquinas. These five ways include the following: God can be shown through motion, causes, necessity, gradation, and the governance of the world. The next five ways come from the common rationalities we find in conversations today. These five common ways include the following: cosmological reasoning (horizontal), cosmological reasoning (vertical), moral reasoning, ontological reasoning, and teleological reasoning. The last six ways come from principles we find in science and metaphysics such as life comes from pre-existing life, metaphysical contradictions, time reasoning, one actual-infinite principle, creation implies a creator principle, and contingency reasoning. Some of these principles overlap somewhat with the first ten ways to show God exists.

Please familiarize yourself with the “16 Ways To Show God Exists,” and be ready to give our skeptic friends good reasons for why you believe God exists. Learning these 16 Ways might feel at first like you are standing at the bottom of a giant waterfall, but once you understand any one of them, you will be ready to jump right into a conversation with a skeptic just as if you are floating around on an inter tube, actually enjoying the conversation quite well.

Heather Marie Schuldt is an author and apologist. She published six anthologies with over fifty authors in 2013 and 2014. She co-authored an award winning fantasy novella, "Gryffon Master," with five authors in 2015. She began studying apologetics in 2016, served as the president of student government, and graduated with a master's degree in 2019. Her 2020 publication is a workbook for writers called "Writers 750 Emerald Workbook." She is happily married with three grown children and an English Bulldog. View more posts