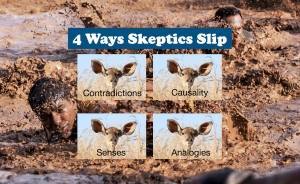 American theologian, author, and pastor R. C. Sproul reduced the problem of skeptics to four ways in which they mishandle fallacies and slip in faulty thinking.

3.) Reliability of Sense Perception – Skeptics often mishandle the human being’s ability to discover truth. We can directly use our senses (seeing, hearing, touching, smelling, tasting) to discover truth in reality, but skeptics often fall back on exalting doubt or they draw the wrong conclusions. On the other hand, skeptics can also mishandle the limitations of human sense perception and misunderstand universal phenomenon.

4.) Mishandling Analogies – Some skeptics are eager to tear apart a particular analogy instead of using the analogy to understand something. Analogies can help human beings understand how two things are alike, but skeptics often zone in on how the two things differ. As a result, some skeptics end up rejecting terms, truthful propositions, and higher levels of thinking if they fail to properly understand analogies.

Heather Marie Schuldt a Christian Counselor and an author of several fiction and non-fiction books, including a young adult science fiction mystery, "Cindy Sailor and the Hunt for Owen" (2021) and a workbook for creative writers called "Writers 750 Emerald Workbook." She co-authored an award winning fantasy novella, "Gryffon Master," with five authors in 2015. She published six Giant Tales anthologies with over fifty authors in 2013 and 2014. She began studying apologetics in 2016, served as the president of student government, and graduated with a master's degree in 2019 and a PhD in 2022. She is the founder of the Writers 750 Program which began in 2012. She is a Certified Therapist in cognitive behavior therapy and loves to help people learn new life skills. She is happily married with three grown children and enjoys riding her bicycle. View more posts